This week, the South’s government officials, including Defence Minister Christoforos Fokaides, said that they were “anticipating the provocations by Turkey” and called on the public to remain calm. 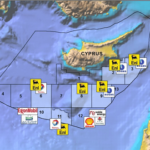 On Saturday, Barbaros had moved into the waters west of Paphos where bloc 6 which has been contracted for exploratory rights by the South Cyprus government to Italian energy firm ENI and France’s Total – is situated where it stayed for around 45 minutes in the afternoon.

The vessel then appeared to sail due east towards bloc 7 before then turning around and heading north again towards Turkey. Bloc 7 is not contracted to any energy companies.

*But it later changed course again and began sailing back south towards bloc 7 – situated south west of Akrotiri and next to bloc 11, where works are currently underway by drill vessel ‘West Capella’ on behalf of ENI/Total.

*It’s latest position at 14.35 on Sunday was shown on maritimetraffic.com as heading towards Guzelyurt (Ed).