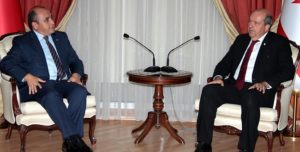 The Turkish Embassy in North Nicosia has announced the opening of the first Turkish Consulate General’s office in Famagusta.

According to information acquired by the prime minister’s office, Tatar wished Demir and Kaban good luck in their new duties. Tatar further added that “the opening of a consulate general in the Famagusta region would provide services not only to the population in the region but also to the students coming from Turkey to study at DAU university”.