Leader of the main opposition National Unity Party (UBP) Ersin Tatar began talks on Wednesday with the leaders of the political parties with the aim of forming a new coalition government.

Tatar, whose party has the higest number of seats in the TRNC assembly, was handed the mandate to form a new government by President Mustafa Akıncı on Tuesday.

In the afternoon, the UBP’s party assembly gave full authority to Tatar to carry out coalition talks on behalf of the party.

Speaking afterwards Tatar said that their aim was to finalise talks before the end of the week.

The UBP leader Tatar’s first meeting today was with the Republican Turkish Party (CTP) leader Tufan Erhürman at 10am.

The UBP leader and his accompanying delegation were greeted by CTP leader Tufan Erhürman.

Speaking after the meeting, Tatar said that they had held a positive meeting with officials from the CTP which had the second highest number of seats in the assembly.

He said that today’s meeting was just a preliminary meeting and that they would hold a general evaluation once he met with leaders of all the parties.

“This is how the process works. We shall evaluate our meetings held today. We do not have a concrete decision to form a coalition with any of the parties. But as I said earlier today the possibilities are limited. We can either have a UBP-CTP coalition, a UBP-HP coalition or an interim government until we hold early elections,” he said.

CTP leader Tufan Erhürman for his part said that he had held a positive meeting with UBP officials and that today’s meeting was a preliminary meeting.

He, however, added that there was nothing for the CTP to evaluate and that a two-party UBP-HP coalition continued to be the most likely coalition scenario at the moment.

Following this, Tatar met leader of the People’s Party (HP) Kudret Özersay. He denied that a UBP-HP coalition was a ‘done deal’. 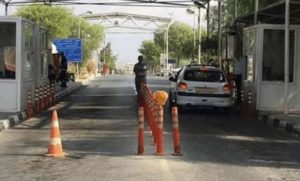