President Mustafa Akıncı made a statement regarding the EastMed pipeline agreement that is expected to be signed between the governments of South Cyprus, Greece and Israel in Athens today.

Akıncı described the agreement as one that “contradicted geographical realities, which did not make economic sense and which has been decided solely on political concerns”.

He said it was not possible to exclude the Turkish Cypriots and Turkey from the energy equation in the Eastern Mediterranean, and that they could benefit jointly from the energy resources in the region. There should be a way to use these resources together in peace and stability, he stressed.

Akıncı pointed out that the solution of the Cyprus problem has become a necessity not only for Cyprus but also for the region. 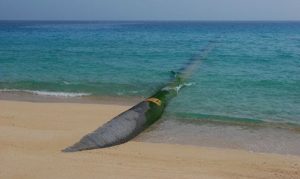 The pipeline, which is planned to extend from Israel to South Cyprus, from Crete to Greece and ultimately to Italy, is a much longer and more costly route than other alternatives.

It is clear that this project, which has been kept on the agenda despite the opposing views of the experts on the subject, will not help to solve the Cyprus problem, just as Southern Cyprus has become a member of the EU alone, Akıncı noted.

The political atmosphere can be changed by mutual steps; but it is impossible to change geography. The geographical facts, the Turkish Cypriots and Turkey in the Eastern Mediterranean from the energy equation suggests that their exclusion is impossible.

“As I have already emphasised, we need to find a way to jointly exploit energy resources in the Eastern Mediterranean and to use them together in peace and stability. This is possible by using reason, by reaching a reasonable compromise and ultimately solving the Cyprus problem.

Once again, it is understood that the solution of the Cyprus problem has become a necessity not only for Cyprus but also for the region.”