Negotiator in the Cyprus talks, Özdil Nami, officially handed in his resignation to President Mustafa Akıncı following his appointment as the new Minister of Economy.

At the meeting, Nami praised President Mustafa Akıncı for his leadership, stating that they had gone through important phases in the Cyprus Problem.

“I’ve learned much from your experience. Thank you very much for everything. You can be assured that I shall continue to support your work in any way you see fit”, he added.

President Mustafa Akıncı responded by saying that he had been working closely and intensively with Mr. Nami for the past year.

Praising Nami for his skills and hard work and for contributing so much to the Turkish Cypriot side’s cause in the negotiations, Akıncı said “his work contributed to taking the talks to new levels.”

Akıncı said that Mr. Nami’s appointment as a minister did not come as a surprise as he had been informed and consulted before the appointment had been made.

The President also said that he was not thinking of appointing a new negotiator at the moment, as he does not want the negotiations to drag on in the same way for another 50 years.

From now on, Akıncı said, the Turkish Cypriot side would like a result-oriented procedure and not an open-ended one.

“Negotiations can only be possible if a strategic framework emerges once the Greek Cypriot side experiences a change or transformation of mentality, if it can truly accept or embrace the political equality of Turkish Cypriots and succeed in getting the Greek Cypriot community to accept this. We shall seek a way to benefit from Mr. Nami should that happen”, he added. 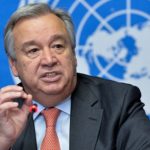 President Mustafa Akıncı reminded that the UN Secretary General Antonio Guterres had not appointed a Special Advisor to replace Espen Barth Eide following the collapse of the talks at Crans- Montana, Switzerland.

“This shows us that there is no such urgency”, he said.

Stating that it had been a great pleasure working with Mr. Nami, Akıncı said that they were not the cause of the failure to reach a lasting settlement on the island.

Responding to a question regarding the outcome of the elections in the South, the President congratulated Mr. Anastasiades on his re-election for a second term.

Expressing the hope that Anastasiades will be more constructive and realistic in his second term, Akıncı said that there was a need in change of mentality.

“The South needs to make a decision. We shall see if they would like to enter a partnership with us on the basis of equality”, he added.