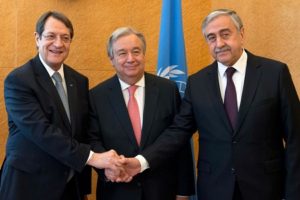 President Mustafa Akıncı, the Greek Cypriot leader Nicos Anastasiades and the UN Secretary-General Antonio Guterres will be meeting in Berlin at 8:30 pm (Cyprus time), it has been announced.

The meeting between the two leaders and the UN Secretary-General will be held at the Hotel Adlon Kempinski, near Brandenburg Gate.

Before the trilateral meeting, the UN Chief will hold separate meetings with the two leaders.

Accordingly, Guterres will have a short meeting with Anastasiades at 7:50 pm and with President Akıncı at 8:10 pm (Cyprus Time).

Meanwhile, the President held a working meeting with his team this morning.

Last night, the UN Secretary General’s Special Consultant Jane Holl Lute met with the representatives of the two leaders as part of the preparations for the trilateral meeting.

Speaking on Sunday as he was leaving for Berlin he said:

“We are going to Berlin with an open agenda so we can set together a new road map, to discuss the steps to be taken from here forward”.

At Ercan Airport, President Akıncı, speaking reporters said that the UN Secretary-General (UNSG) Antonio Guterres’ involvement in the process was very important and that it was necessary to make use of this opportunity for the future of Cyprus. He, however, warned the public not to raise its expectations too high.

“Nevertheless we are going to Berlin with a constructive stance,” he noted.

Akıncı said his stance from the beginning had been realistic which does not veer from the outlines of the UN parameters, in support of a bi-zonal, bi-communal federation (BBF) based on political equality and effective participation in decision-making processes.

He said open-ended talks were a thing of the past and what is needed is a results-focused, well-prepared and well-separated process.

“There is material pointing the way to a solution. This is the February 11, 2014, Joint Declaration, the framework of June 30, 2017 and the convergences that have been achieved to date,” he said.

“We shall discuss where we stand as well as future steps. We are going to Berlin to determine a road map,” Akıncı stressed.