A migrant boat has sunk off the north coast of Cyprus. At least 19 people have drowned.

Dogan News Agency said that there were about 150 Syrian refugees on board the vessel who were trying to reach Europe.

It is reported that their vessel sank around 18 miles off Yeni Erenköy in the early hours of Wednesday morning. The boat went down after the engine room flooded. 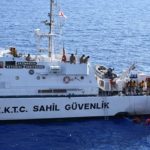 The Turkish Cypriot and Turkish Coast Guard went into action working with Turkish commercial ships in the area. Transport Minister Tolga Atakan said that 105 people had survived and had been rescued, one of whom was seriously injured and was transported to North Cyprus. A search is on to try and find those who are still missing. The rescued have been transported to Taşucu port in Turkey.

An inquiry into why the boat sank has begun since the sea state was calm and there is a suggestion that the vessel may have been deliberately scuppered.

According to the UN’s International Organisation for Migration, over 1,400 illegal migrants have died in the Mediterranean since the start of 2018.